Back to all posts

Making A Come Back

So, I am back at this again, after a long hiatus, trying to reboot the real music career that has eluded me. It's not that I have been inactive; au contraire, I've been very active but pulled in many directions by the different genres and instruments I play. I thought I had found my voice in 2002 when I released my first CD but alas, it was not to be.  Teaching lessons is a necessity, and I've become comfortable with that. But being an artist is not about being comfortable. We all must grow, change, and adapt or we become irrelevant quickly. My career goal with music is modest yet ambitious; to provide for myself through playing music only.

Most of my peers know me as a jazz saxophone player, but I have a soft spot for guitar and rock and roll and folk music. It's been difficult for me to hook up with a serious band mostly because I am a saxophone player going from gig to gig. So I've always played guitar on the side and recently have been going to town on improving my vocals.

I did what I hope will be my last saxophone gig on the weekend. It was fun, well worth it, but it was another distraction from what I've been trying to do. 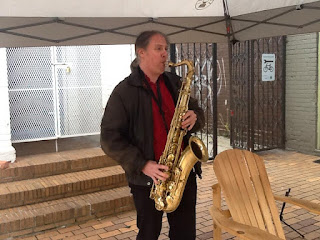 In two weeks I make my debut at a local charity concert solo with equipment I've been learning to incorporate. This is my set up. 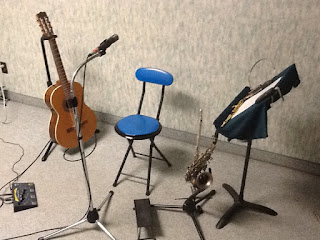 Since this picture was taken, I've replace the standard microphone with a headset microphone so I can have more freedom to move my head while singing.